Fastpacking: Lost and Found in a Utah Canyon

A trail runner heads into an extensive Utah canyon equipped with minimal gear and a plan to complete a several-day loop in two days. It’s called fastpacking.

It wasn’t that I was lost, just really not sure of where I was.

Twelve hours earlier I scurried through a cedar forest and dropped into a lush green oasis the likes I had never seen: a desert canyon sanctuary cut by eons of flash floods, wind and water, now beaming with life. Route finding was problematic, and the terrain was trying. I wasn’t sure what I was getting myself into, and I sure didn’t know what the hell I was doing. I had read that it took three to five days to complete a loop. I figured I could do it in two.

My few belongings filled a vest-style pack: a minimal tent, a down quilt, an inflatable mattress, and an improvised travel kit. For meals I carried about two and a half pounds of food I could rehydrate with water boiled in a titanium cup on a stove that weighed less than an ounce. I also carried a compass, headlamp powered by a watch battery, a titanium spoon, carbon fiber trekking poles, a small water filter and soft half liter flask, along with a plastic water bottle and an ultra-light one-liter foldable canteen. I wore paper thin synthetic clothing with a 3-ounce jacket stuffed in my pack just in case. I donned a desert-style sun hat straight out of the Foreign Legion.

Earlier, I had seen a few groups of backpackers heading on their own journeys, catching their silhouettes backlit by the morning sun. Some were tidy and quick, others were clumsy. For the most part, they made for odd-shaped figures. Top-heavy forms with stick legs, hunched over under the burden they carried. On some, items dangled from their packs, catching on trees, clinking and clanking with every step like windchimes made from pots and pans.

I slipped on my light pack and started running. It’s called fastpacking. It’s not always fast, and there’s not much packing, but it’s a way to move deftly through terrain, affording extra time to ponder when called for. A few hours in, I settled by a shallow pool and scooped cool water into my soft flask filter. Per usual, I focused my attention to the potholes.

Horsehair worms look like what they’re called, curling their way around potholes and creeks — small, but big enough to gross you out. Of course, the fairy shrimp, mosquito larva and other things darting around raised an eyebrow. Ephemeral pools like this one hold galaxies of living organisms.

Back on route, navigation in Utah’s wild canyon country can be tricky. It seems simple enough to stay between the walls towering overhead, but the density of the vegetation, endless tributary canyons and side-hike distractions all create a maze of the mind. Add the climax of endorphins of the so-called runner’s high and judgment can fly out the window.

My plan was simple. Follow one canyon to another, hang a left, find a nice spot to eat a glorious meal and sleep. Over the course of the day I wisped through the landscape up and over obstacles, meandering gullies, traversing walls and running with unbound satisfaction. Spiny lizards stole across the trail before me, birds exploded from the trees. Dragonflies buzzed by and hummingbirds whistled passed.

I did have a small section of a map I cut from its entirety, but never considered the grave affect my sweat would have on it. It weakened into a soft tissue wad. The more I referred to it, the more it fell apart.

The canyon was in bloom mile after mile. Hanging gardens, crystalline pools. Beehive cactus. Lupine. Desert globe mallow, fearless hummingbirds. Natural arches. Animal tracks. Bear tracks. Cub tracks. Black bear from nearby mountains are well adapted to these canyons. The idea of running, literally, face-to-face into a mamma bear and her cub was terrifying. Doing so in a narrowing passage was even worse.

Navigating a treacherous route around a pour off, haphazard points where the canyon floor can drop a few feet to a few stories over an edge, it hit me. This isn’t right. I had missed my turn. A freaky anxiety set in. It wasn’t lost that I was lost, just really not sure where I was.

The walls, easily rising 500 feet above me, tiered as they stepped down to the canyon floor. A chorus of tree frogs echoed, reminding me to load up on water for the camp I was about to make. I started climbing a bench to find a place to sleep where a bear and her cub would not be.

One thousand calories to normal.

It’s called bonking. Depleted glycogen stores in your muscles and your liver, and there’s nothing left. Period. First the body goes, then the mind. The antidote is food. I settled on a small shelf about 30 feet above the canyon floor. The golden hour of sunset became shades of blue grey and the temperature plummeted. I should have been snuggled in a 32-degree-rated down quilt by then. Instead I was exposed, and the body’s natural evaporative cooling system that kept me cool all day was working against me.

Using a trekking pole for the apex of the tent, I fashioned the perfect stick for the foot.  Barely enough room for one person, I sat up in the doorway and wet a handkerchief for a bird bath, the grit and grime exfoliating my skin as I wiped it off.  I nearly hyperventilated inflating my air mattress, wrapped myself in my quilt and opened my ziplock meal pouch. Some kind of lasagna, it was the best thing I had ever eaten. Settling down, I laughed out loud. The tree frogs sang me to sleep.

Later, after almost two liters of water, I stumbled around the terrace at some ungodly hour. When I saw the starlight in the night sky, I was awestruck. It was one of the most unflawed things I had ever seen.

I blasted awake at 5:13 a.m. Birdsong bounced around the canyon corridor. Unnoticed the night before, cuts and scrapes on my legs had grown inflamed and irritated. A blister the size of a quarter had formed on the bottom of my right foot from the incessant sand I fought for 20 miles the day before. Of all the things I left behind, at least I had instant coffee and creamer. For nine minutes I basked in a French Vanilla morning bliss.

It felt natural to run. After an hour, I came across a party camped at the wide confluence I missed. I slowed to soften my footsteps — it was still dawn, after all. I noticed their accoutrement, mostly on one side of the site. Tents, a small table. Several lanterns. Water bottles, a thermos. Two small foldable chairs. Blankets. Boots. Cooking sets with various pots and pans. Pump-handled water filters. I paid such close attention I was startled when a woman sitting up in a faded sleeping bag spoke to me.

“Morning,” she said, “where’re you coming from?”

It was a loaded question.

“I got a little turned around,” I said.

“You been out all night?

I took notice of her small kit: a nice yet well-used sleeping bag, her beat-up poles, patched mattress. A threadbare rucksack. Her boots were traveled, her mature face as featured as the rock around her. She slept in just the bag, no shelter, under the stars. Directly across on a bedrock slab others woke to see the quiet commotion, their heads emerging from peeling zippers and out from layers of superfluous stuff. They stared at me, baffled, taking in my cuts, my funny little running shoes, my grimy appearance and my tiny pack.

I reconfirmed the only two ways out, up a few short miles though a side tributary canyon, or all the way back out the main canyon system.

“You could be out of here in a few miles,” she said. “Or you could go back down that way. You know what that’s like.”

It was an unusual, brief encounter. The entire previous 36 hours had morphed into a bizarre romp through a fairytale dreamscape of natural wander spiked with mental and physical challenges. The feeling of being lost was an eye opener. The bare minimum comforts of a hasty camp was rewarding, and the choice of what to do next. A kind of crossroads that she somehow was offering me.

“Thanks,” I said. We nodded on a strange level of understanding one another, how meaningful it is to be out here — an unspoken appreciation that would have been cluttered by words.

I stepped into a gentle stride and headed back into the canyon.

BRANDON MATHIS is the marketing director at Backcountry Experience in Durango, Colorado, where he lives with his wife Bee and Juneau, an energetic and cover-stealing terrier. An ever-inquisitive outdoor enthusiast, Mathis began trail running as a way to explore the region more intimately.  In this issue, he writes about fastpacking, a blend of trail running and back packing. “With fastpacking, your runs are no longer interrupted by things like meals and sleeping,” Mathis says. “Plus, it’s a good way to maximize only having two days off.” 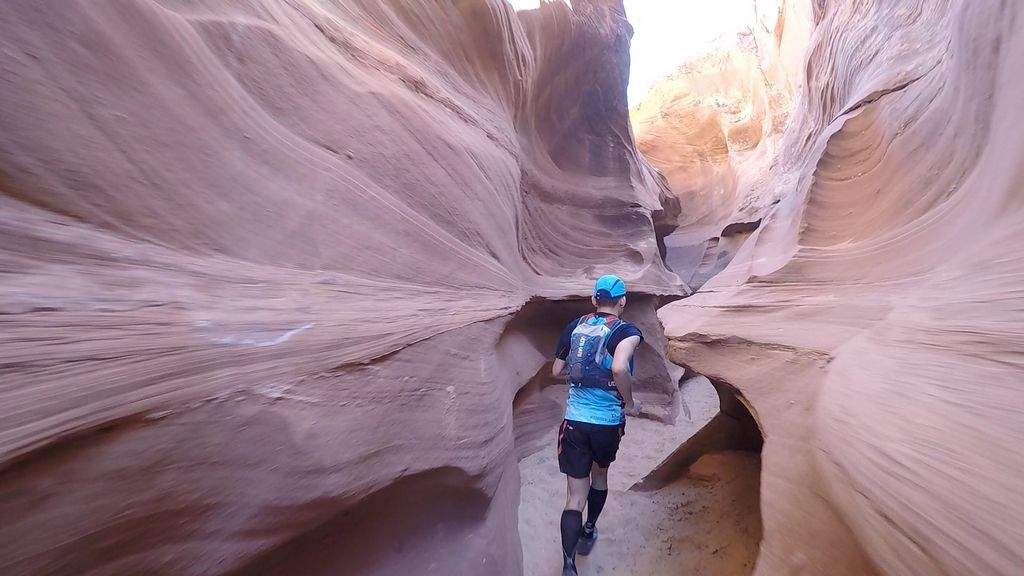 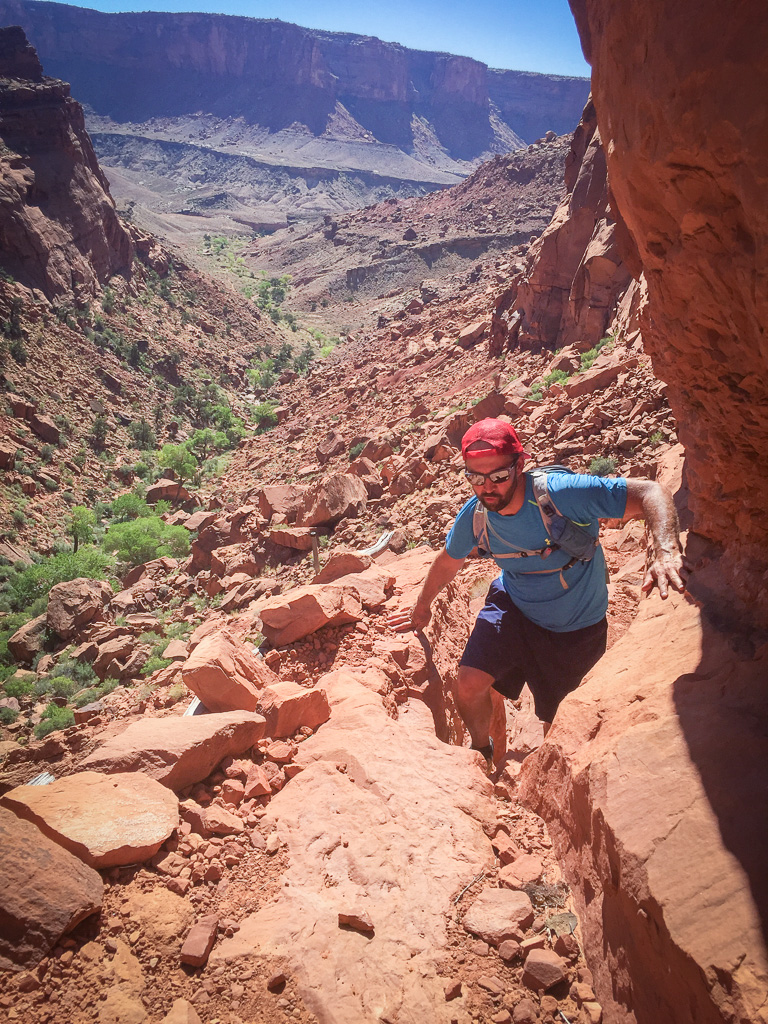 Canyon Country: trail running in Canyonlands National Park and beyond 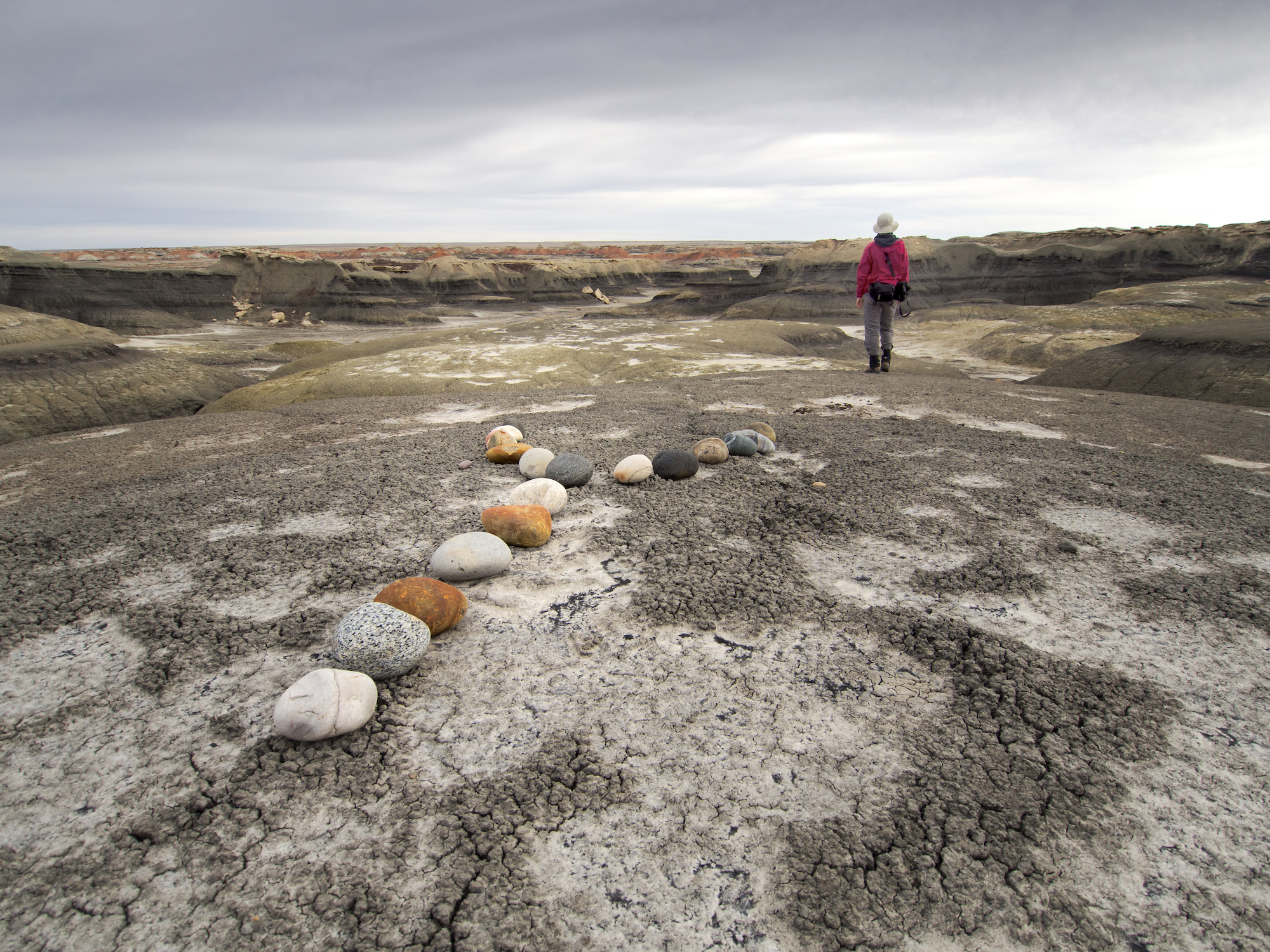