To many indigenous tribes, the winter season is a time of storytelling. Some stories are about the history and future of a place. Others are about the people. And many encompass the land and the features that make an area so special. Weave these threads together, and you will understand what Natives Outdoors is working to change in the outdoor industry.

Natives Outdoors is a small outdoor media and apparel company. Its mission statement reads: “to empower indigenous communities through our products and storytelling for a sustainable world.”

While many of Natives Outdoors’ ambassadors and athletes dominate warm weather sports such as rock climbing and running, a few thrive in the winter while sharing their passion for the mountains and snow.

Natives Outdoors CEO Len Necefer began skiing about four years ago. “It came out of necessity more than anything by just trying to broaden our skillset in terms of how we engage with the mountains,” Necefer said.

Necefer (Diné/Navajo) stated that Natives Outdoors has three athletes, including himself, that are involved in winter sports, with a few others improving their skiing and snowboarding skills this season.

“What we’re trying to do is cultivate the athletes that can then be the role models that folks can look up to,” Necefer said.

The other two Natives Outdoors winter athletes include Connor Ryan (Húŋkpapȟa Lakota), a skier living in Boulder, Colorado, and Steven Recalma (Kwakwaka’wakw & Salish), a snowboard coach based out of Vancouver Island, British Columbia.

Ryan had started skiing at the age of six, but didn’t discover his love for skiing until he was 20.

“From there on, I just started skiing like 100 days a season and started making my life about it,” Ryan said. “To be in a place of solitude and connect with nature, while still being able to do something that was exciting to me, really just changed my whole perspective and kind of gave me a newfound sense of independence.”

The snowboarder for Natives Outdoors, Recalma has been involved in the sport for 23 years; competing for four of those years.

“I would say that I was majorly influenced by drugs and alcohol at a very young age and so snowboarding basically saved my life,” Recalma said.

His current focus, the Vancouver Island First Nations Snowboard Team, helps youth get involved in a sport that is challenging to get into due to its expensive nature.

“We also promote healthy living and lifestyles and ask that youth remain drug and alcohol free and send us report cards for school,” Recalma said.

In recent years, Natives Outdoors has also worked closely with professional athletes such as Brody Leven, Forrest Shearer and Cody Townsend on projects that have helped to increase awareness of indigenous athletes in the outdoor industry, while shedding light on important issues surrounding climate change.

This past winter, Necefer and Ryan were invited to participate in Townsend’s “50 Project,” where Necefer and Ryan educated Townsend on the importance of place and indigenous culture while skiing Mount Tukuhnikivatz in the La Sal Mountains of Utah.

“To see that level of humility in some of the top athletes in the world really just opened my heart, to see that a better way forward is something that we all want,” Ryan said.

Mountains are sacred to many tribes, but many summits are seeing diminishing snowpacks.

“In the Lakota tradition, we think of a lot of these places and call them in such a way that they are a relative to us,” Ryan explained. “They’re like another being that has something to offer and teach us, and getting to know mountains at that level of intimacy was one of my first experiences in really seeing that for myself.”

The mountains near Winter Park Resort and Eldora Mountain hold a lot of meaning to Ryan. It is where he would learn to ski. Also, the valley below Eldora is the first place he had done a hanblechya, or the traditional Lakota vision quest ceremony.

Last season, Ryan had the opportunity to join Necefer, Natives Outdoors athlete Aaron Mike and Patagonia snowboarder Forrest Shearer on a ski trip to the summit of one of the four Navajo sacred mountains. The mountain, Dook’o’oosłiid — or Humphrey’s Peak — is located in the San Francisco Peaks of Arizona.

Necefer explained that this mountain is known by both the Hopi and the Navajo to have snow on top perpetually throughout the winter. However, that is no longer the case. The excursion was a way to bring attention to the issues of climate change in the ski industry.

“One of the threads we’ve been looking at is climate change and the impacts climate change will have on these traditional stories and creation stories,” Necefer said. “Our hope is to be able to document and capture these images and stories to hopefully retain them as a means of teaching folks after us about what these places have signified and what they mean.”

For Recalma the mountains are a place to escape to. They allow the children on his snowboarding team to get out and enjoy the blessings of the mountains while forgetting the struggles of day-to-day life.

“If they need to cleanse themselves or re-ground themselves, then that’s the place to do it,” Recalma said. “We’re doing it in a more modern way; we’re adapting to what we have.”

Recalma will continue to work with indigenous youth and share his passion for snowboarding.

“Our goal is to coach the youth and, as time goes on, the youth coach the other youth; so it’s kind of a revolving door,” Recalma said.

Natives Outdoors has several projects that they are currently working on this season. These projects will keep working to raise awareness of indigenous athletes in winter sports while focusing on the impact of climate change on snowpack and Native American culture.
Necefer said: “We’re trying to communicate the storytelling that can hopefully provide that inspiration.”

Editor’s Note: A version of this story ran in the Winter 2020 issue of Adventure Pro Magazine crediting Steven Recalma for the main photograph (above). This photo belongs to Isaiah Boyle. See more of Isaiah’s work on Instagram at @isaiahjboyle.

TIONA EVERSOLE is an outdoor enthusiast based in Durango, Colorado. Look for her on the slopes or exploring the local trails with her pup, Sgt. Pepper. 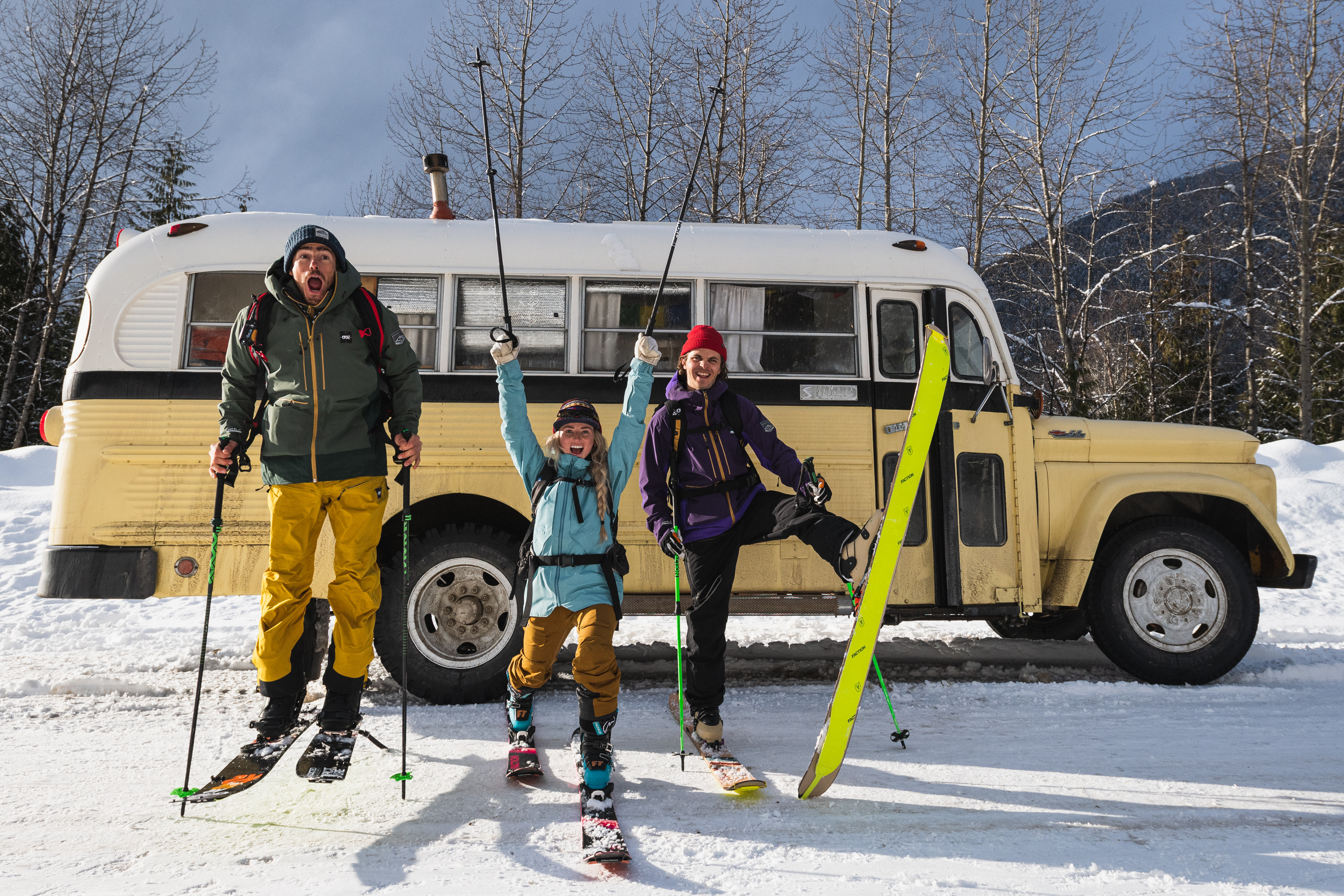 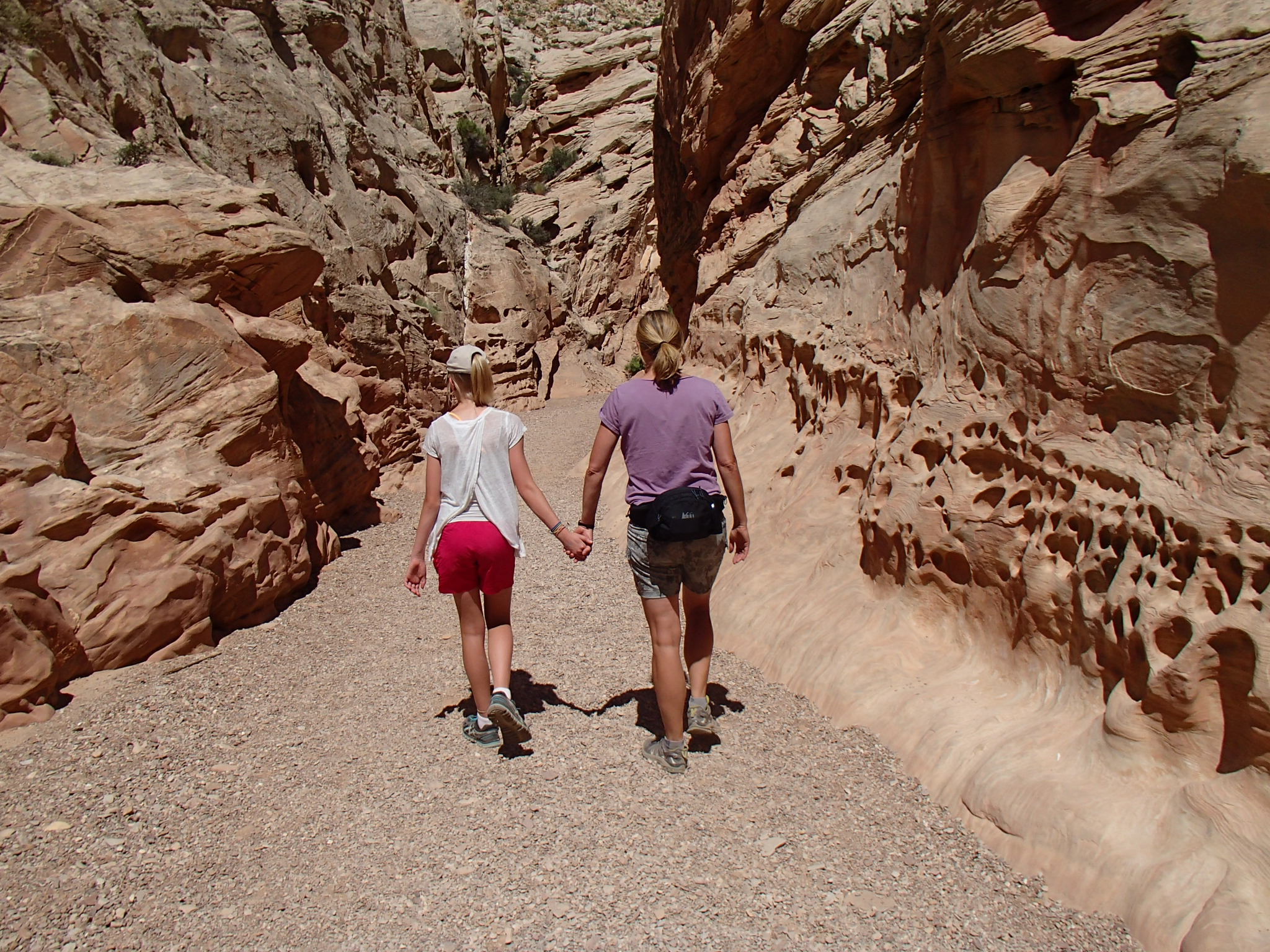 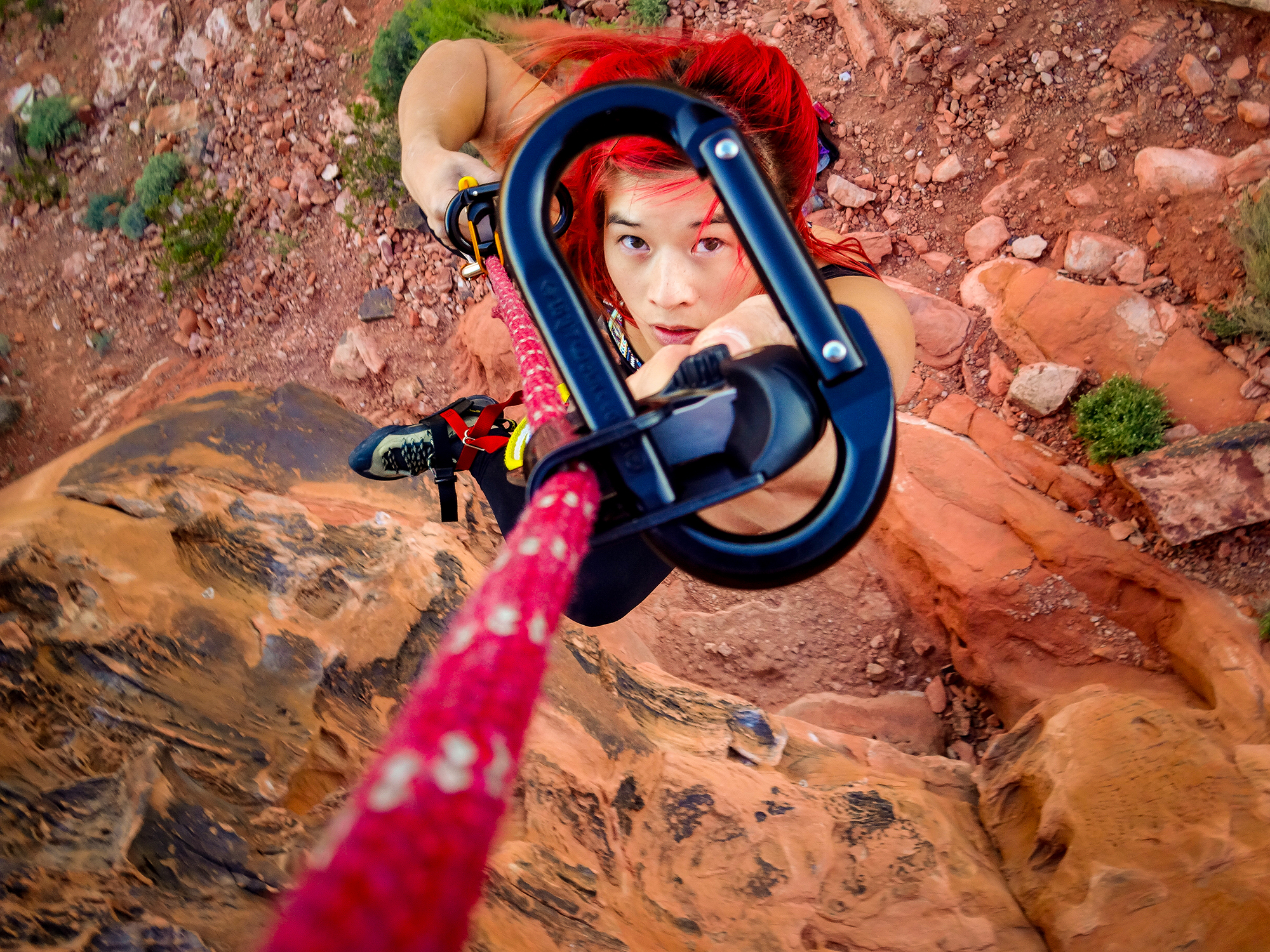 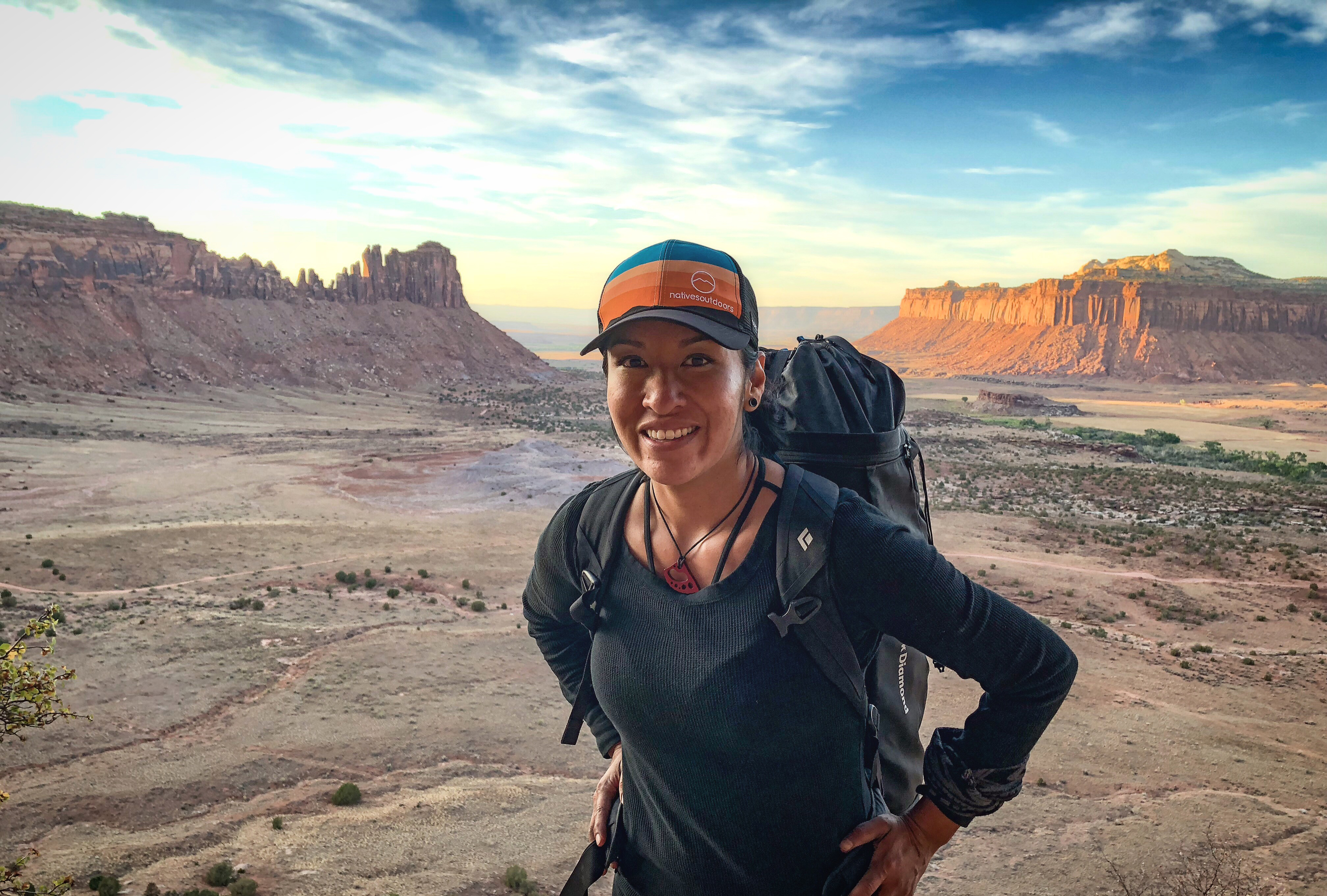 What Risk and Reward Mean to Women Outside